Don't Miss
Home / Technology / We wanted flying cars, instead we got 140 characters

We wanted flying cars, instead we got 140 characters

“The future ain’t what it used to be” said Yogi Berra.

Yogi Bear was a bear in Jellystone Park, and the most prescient thing he ever said was “I’m smarter than your average bear” which, being a talking bear, must have been true since most bears don’t even talk.

Berra (not Bear), who perhaps was smarter than your average baseball player, but then again maybe not, also said “It’s tough to make predictions, especially about the future“.

Which brings me to my main question; does science fiction – especially what we see in the movies – really predict what we’re going to see in the future?

More particularly, do we ever get to see in real life the technology and innovations we see in sci-fi movies?

That’s my particular area of interest.

Peter Thiel, the PayPal founder, famously once said “We wanted flying cars, instead we got 140 characters“. In other words, and with the greatest respect to Twitter and its soon-to-be billionaire founders, tweeting about Miley Cyrus and her twerking doesn’t come anywhere near the excitement of soaring through the air in a converted DeLorean DMC-12 like “Doc” Emmett Brown and Marty McFly in Back to the Future, or taking a ride in a flying taxi driven by Bruce Willis in the movie The Fifth Element. By the way, Peter, we do now have the flying car, and ironically you’re one of the select few on Earth who could actually afford to buy one (as opposed to the millions who can afford to use Twitter).

In fact, not only do we have a flying car; we have quite a few other pieces of tech kit that science fiction stories appeared to “predict”

Take a look, for example, at this article – Blade Runner: Which predictions have come true? – that appeared on the BBC News website last year.

One of the main areas of Sci-fi “prediction, mentioned in the BBC article, is AI & robotics, a topic which Ben Way has written on in his book Jobocalypse and on this website. You’ll be surprised at what is currently being developed in this arena, maybe even shocked. Next month I’ll be running an event at the London Science Museum called “Robot Love” (part of a robot-themed evening being staged in the museum’s main gallery). Robot Love as in “I love Miley Cyrus” or “I love Pamela Anderson” rather than I love water skiing, abseiling, whitewater rafting, country hikes, chocolate, pizza, Tarantino movies, etc.

In carrying out my research for this event I was amazed at some of the developments that are taking place in robotics. Take this, for example: Atlas, the latest robot to come out of the Boston Dynamics stable (Massachusetts based Boston Dynamics are leading developers of robotics technology aimed at military uses; no surprise then that such work is being funded by the U.S. military’s hi-tech research wing DARPA). And at the other end of the scale Roxxxy, allegedly the world’s first sex robot (don’t get too excited though, and I’m pretty sure that once you watch the YouTube video you won’t).

Whilst Atlas doesn’t yet pose the same kind of threat that Arnold Schwarzenegger’s time travelling T800 did in the Terminator movies – and certainly Roxxxy is no Kelly Le Brock in Weird Science – it’s clear that robotics and AI technologies are developing very quickly and when these various technological advancements are brought together, the kinds of robots we will be seeing will not be a million miles away from some of the robot characters we are familiar with in science fiction. Though sadly not the ultra sophisticated ones like Data from Star Trek TNG or Number Six from Battlestar Galactica; probably something more like the robot in the original Lost in Space TV show, programmed to shout “danger, danger!” whenever we’re about to be accosted, maybe by some charity mugger (“chuggers” we call them in England) in the shopping mall. 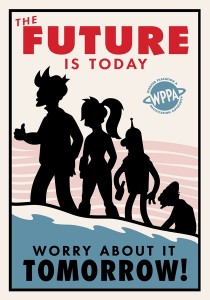 But seriously, in many ways the technologies, innovations and products we see in science fiction remain just that, fiction. In truth science fiction most often is not really predicting the future but rather uses fantastical futuristic scenarios in order to comment on and critique the past or the present. So, for example, The Day The Earth Stood Still addresses our penchant as a species for coming up with novel ways of annihilating ourselves. The Star Wars saga tries to show the dangers of drifting towards totalitarian government. District 9 warns us how not to treat outsiders and refugees. Jurassic Park cautions us about overreliance on our own technological genius. And the shortly-to-be-filmed (hopefully) Robopocalypse suggests that the Internet of Things may not be such a wonderful thing after all. Here, the technologies and products on show may merely be plot devices, sometimes nothing more than a means of getting our heroes from A to B where B just happens to be thousands of light years away.

However, there is also science fiction where the “science” is more respectful of reality. For example, where perhaps the writers are keen to demonstrate that there is some connection with reality and real science in whatever it is they happen to be producing (Stanley Kubrick’s 2001: A Space Odyssey is a very good example of this, as is Contact, starring Jodie Foster, which was based on a novel by the astronomer Carl Sagan). In these instances there is a clearer link between the imaginary sci-fi technology and emerging counterparts in the real world.

So, for Stephen Spielberg’s Minority Report, they hired as technical consultant a guy named John Underkoffler who designed the hand gesture driven computer interfaces you see in the film. Underkoffler went on to found Oblong Industries, with the intention of commercialising those very same “imaginary” technologies. You can see him demoing the real life version of the Minority Report technology during his TED talk in 2010.

And then there’s Elon Musk, the real-life equivalent of Iron Man’s alter ego Tony Stark (the actor Robert Downey Jnr actually modelled the character on Musk), confirming the rumour that he’s recreating the hand gesture driven computer interface seen in the Iron Man movies, by sending a tweet to Iron Man Director Jon Favreau which simply said “Yup. We saw it in the movie and made it real“.

It’s these latter examples that fascinate me most, where you can see clear instances of sci-fi inspiring technology innovation, and science fiction itself being shaped by the futuristic imaginations of scientists and engineers. And more of these examples exist, from the Motorola StarTAC mobile phone created by Marty Cooper 40 years ago, to Neurosky Inc’s mindbending (literally) Star Wars Force Trainer.

So, to claim or deny that science fiction predicts the future is in either case a gross oversimplification. It’s one of those complex issues for which there is no black or white answer. What cannot be denied though is that seeing those marvellous imaginary gadgets in science fiction, whether on screen or in print, often produces an “I want one of those” reaction in us, and it’s also true to say that there are scientists, engineers and inventors around the world who had an “I want one of those” moment and from then onwards were driven to make real that which was previously merely a fantasy.

And from time to time we do get to sample “one of those“, whether it’s a mass market smartwatch product like the Samsung Galaxy Gear or a rather more exclusive toy like the flying car.

So perhaps “the future is now“, in the words of another famous sportsman George Allen, an American football coach who was inducted into the Pro Football Hall of Fame in 2002. Maybe he was smarter than Berra. Yes, maybe the future ain’t necessarily what it used to be, but at least in the here and now we are getting access to some of tomorrow’s technologies today.

Previous: The future of space travel is mind travel
Next: If you really do want a flying car, then here it is …

A guy who's passionate about envisioning the future and building towards it, particularly through strategy development and business planning. Visit my website FuturZ (www.theincredibleshrinkingworld.com) for more ideas and insights about technology innovation and the future.

Google Struggling To Keep Up With AI Technology